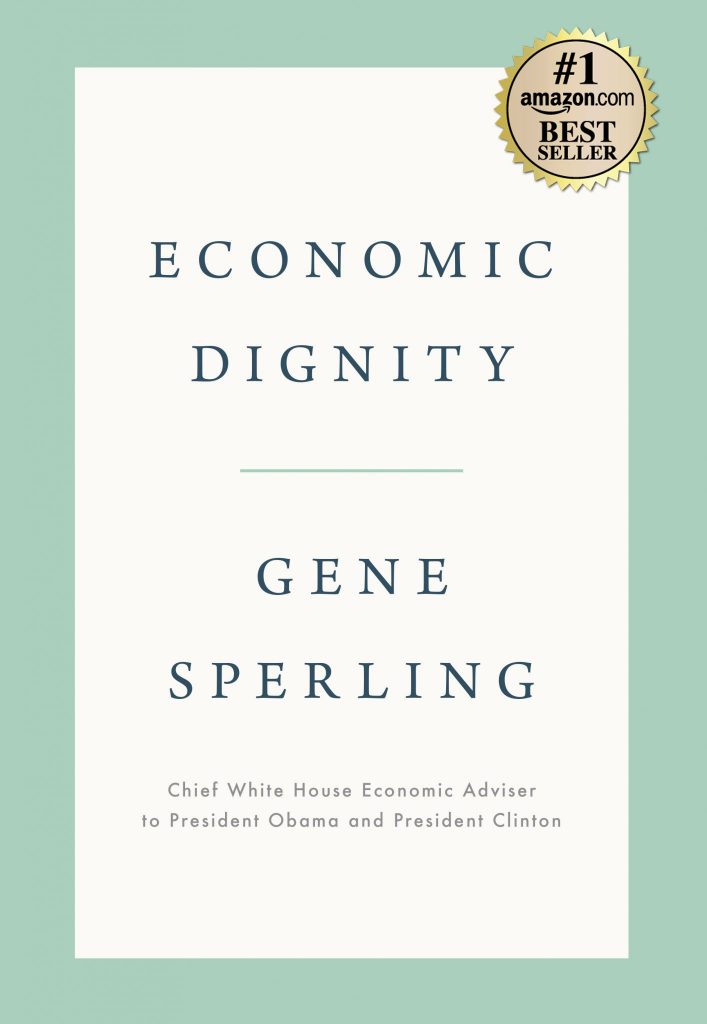 “Gene Sperling draws a compelling case for looking beyond the numbers to the nature and quality of work in the twenty-first century. His clear-eyed, sharp analysis demands a close read by policy makers and the rank and file alike. Economic Dignity shakes up static debates about education, tax policy, labor, and American values, and it should galvanize actors across the political spectrum to reexamine our common purpose. In turn, this thoughtful take reminds us of our capacity for progress when we put people at the center—and defend the dignity of all.” —Stacey Abrams

“In a time of ever more powerful technologies and growing economic uncertainty, we need to be clear on our values. Gene Sperling shows why economic dignity should be our end goal and provides a compelling program to bring it within the grasp of all Americans. Economic Dignity is a must read for every policymaker, economist, and citizen.”
—Erik Brynjolfsson, professor at MIT and coauthor of The Second Machine Age

“Gene Sperling, one of the nation’s most distinguished public servants, reminds us that while money matters, life is about much more, and proposes that policymakers focus on dignity as our North Star. This book is an exemplary guide toward policies that promote not just employment and good wages, but also the life of purpose and meaning that has been lost to so many Americans in recent decades.”
—Professor Sir Angus Deaton, Nobel Laureate in Economics 2015

“Gene Sperling gets it. He understands that the dignity of work isn’t just a political slogan—it’s an ethos; it’s who we are as progressives, and it’s how we must govern. Defining and fighting for that dignity is at the heart of today’s economic debates, and that makes Gene Sperling essential reading.” —Senator Sherrod Brown

“Sperling’s call to make economic dignity our North Star provides a powerful moral frame for guiding economic policy that can be unifying for all progressives—even when we don’t agree on every solution. Sperling rightly stresses that we need bold steps to ensure what he calls an ‘economic dignity wage’ and economy that provides true first and second chances, and that government must play a far bigger and smarter role in ensuring the innovation, worker power, and skills we need to make economic change work for the many and not just the few. Sperling is one of the most important economic thinkers of our time.” —Ro Khanna, member of Congress

“Never have I come across a book that is so intellectually engaging, deeply compassionate, and solutions oriented at the same time. Economic Dignity is all of those things on a topic as encompassing and defining as the economy.” —Ai-Jen Poo, director,  National Domestic Workers Alliance

“Economic Dignity points us beyond our fixation on GDP to the ends economic policy should serve—promoting the dignity of work and the well-being of families and communities. Gene Sperling reconnects economics to moral and civic purpose and offers a framework for a much-needed debate about how to help those left behind by the winner-take-all economy of recent times. A healthy economy not only delivers the goods, he reminds us; it also provides the basis for mutual respect among citizens.” —Michael J. Sandel, author of What Money Can’t Buy: The Moral Limits of Markets